Motorists preparing to turn at an intersection must quickly process several pieces of information before making their move: traffic signals, traffic signs, pedestrians, cyclists and, of course, other vehicles.

But if drivers become overloaded with information, the results can be deadly – and it’s often pedestrians and cyclists who pay the price.

Canadian and international studies show that driver inattention is a leading cause for collisions with pedestrians and cyclists – including those who were later identified as having right of way. “It’s apparent that at certain intersections, we’re hitting the limits of drivers’ information-processing abilities,” says [UTTRI associated faculty] Professor Birsen Donmez of the University of Toronto’s department of mechanical and industrial engineering in the Faculty of Applied Science & Engineering.

“There are so many things one has to pay attention to – and drivers are failing to do so given the issues we’re seeing with pedestrian and cyclist crashes.”

Donmez, who holds a Canada Research Chair in Human Factors and Transportation, leads an interdisciplinary research team that is collaborating with the City of Guelph to evaluate driver attention and gaze towards pedestrians and cyclists at intersections. The experiment will use eye-tracking equipment to better understand the interplay between driver attention, infrastructure design and collisions.

Funded by $25,000 from the Social Sciences and Humanities Research Council of Canada’s (SSHRC) Partnership Engage Grants program, the study will see Donmez team up with Professor Jay Pratt of the department of psychology in the Faculty of Arts & Science, [UTTRI associated faculty] Associate Professor Paul Hess of the department of geography and planning in the Faculty of Arts & Science and Liraz Fridman, transportation safety specialist with the City of Guelph and adjunct professor in U of T’s department of mechanical and industrial engineering.

“Addressing society’s biggest challenges often requires researchers to work across disciplines and, importantly, in partnership with stakeholders beyond academia,” says Professor Markus Bussmann, chair of the department of mechanical and industrial engineering.

“Professor Donmez’s study on road safety – an issue of importance to each one of us – exemplifies the approach by combining innovative use of technology with interdisciplinary scholarship and collaboration with a municipal partner.”

It’s one of six U of T-led initiatives to receive one-year Partnership Engage Grants, which are awarded quarterly to help researchers conduct timely and short-term research with a partner organization from the public, private or not-for-profit sectors. Four of the U of T projects received funding via the Partnership Engage Grants COVID-19 Special Initiative, which aims to support social sciences and humanities research on the impacts of the pandemic.

“I look forward to the outcome of this important project – and indeed all of the U of T-led projects that have received support from the SSHRC’s Partnership Engage Grants program,” says University Professor Ted Sargent, U of T’s vice-president, research and innovation, and strategic initiatives.

Over the past few years, Donmez and her team at the Human Factors and Applied Statistics Lab have been studying driver attention using tools such as driving simulators and eye-tracking wearables that examine where drivers look – and don’t look – when on the road. Their projects include a 2018 study, run in Toronto, in which eye-tracking equipment and glasses were used to assess where drivers allotted their visual attentions on the road.

However, the SSHRC-funded study is the first to involve a municipal partner.

“The City of Guelph has evidence on traffic conflict data – which is high-level data – but they want to understand the issue from driver behaviour and attention perspectives,” Donmez says. 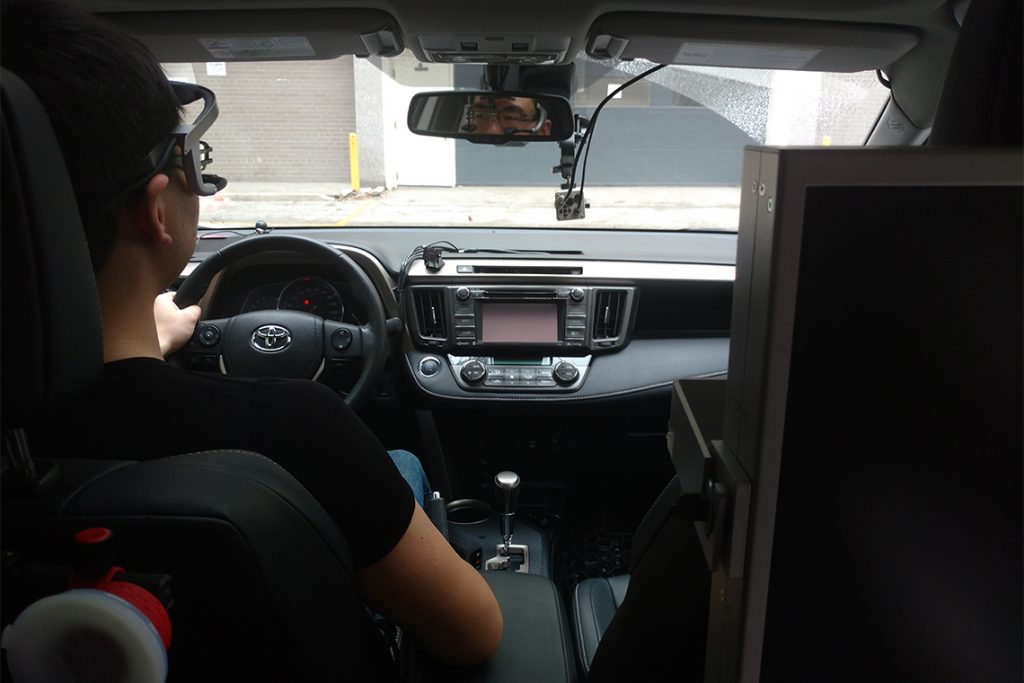 “We have a camera that faces the driver, which gives us information about their body position, head movement, emotional reactions and so on, and we have a road-facing camera which gives us a dashboard view to see objectively what the scene is in front of the vehicle as the person drives,” says Joelle Girgis, a second-year master’s student in Donmez’s lab who will be leading the data collection and analysis. “The most critical equipment would be the eye-tracking glasses. These glasses will give us a view of what drivers are looking at, even as they move their heads.

“This way, we know both what the objective road scene is in front of them, as well as where they’re gazing specifically.”

Once the data is collected, drivers’ turns at intersections will be coded according to whether they gazed at areas that were previously identified as being important.

“The question we’re asking is: Did they or did they not look at certain critical areas where a pedestrian or cyclist may appear?” says Girgis, whose master’s thesis will focus on the study. “So, we’ll view the videos and decide on whether the driver did or did not pay attention or directly gaze at a pre-determined area of importance.

“That gives us information that we can then turn into trends and statistics to see gaps. For example, drivers might not be checking their blind spot or right mirror when they’re stopped at a red light and need to turn right; maybe they’re overwhelmed; maybe there’s a lot of traffic coming from the left side; they’re also trying not to hit a pedestrian in front of them.

“So, there are all these things related to cognitive load that we might be able to infer based on the specific circumstance of where they are – and are not – looking.”

A camera facing the driver provides data about body position, head movement and emotional reactions. A road-facing camera, meanwhile, allows researchers to monitor the scene in front of the vehicle (photo courtesy of Birsen Donmez)

Girgis says driving routes and intersections will be chosen based on data about problem areas, as well as to cover different kinds of infrastructure and turn situations.

“There are certain intersections in Guelph where if a pedestrian or cyclist does get struck, the chances of them getting injured are high,” says Girgis, citing one particular Guelph intersection in which the nine vehicle-cyclist collisions reported between 2015 and 2019 all resulted in injuries to the cyclist.

“These are priority intersections where we’d like to understand what it is that’s causing the severity of collisions between vehicles and vulnerable road users.”

Girgis says the goal is to complete the driver data collection between April and September while respecting COVID-19 public health guidelines.

Donmez notes that driving data collected by the researchers still represents a “best-case scenario” since it won’t be able to take into account common in-car distractions such as cell phones and conversations with passengers.

“The participants aren’t doing anything else. They’re just focusing on their driving. Although it is an unfamiliar vehicle – so there’s that caveat there – I would expect that they have a lot less failures in our study compared to how they normally drive,” she says, adding that future studies may drill down on particular problem areas with the ultimate goal of informing policy and infrastructure design.

What might future solutions look like? Donmez says they generally come down to creating separation between drivers and vulnerable road users – both physically and in time.

“If you have barriers, you separate traffic,” Donmez says referring to the physical aspect. “But at intersections, the three modes of transportation will still merge. One of the issues is that cars can move at the same time as cyclists and pedestrians, so they’re not separated. In these cases, signals could be used to control traffic and decrease chances of conflict – that’s separation in time.”

She says her research shouldn’t be interpreted as blaming drivers. Rather, its focus is on finding ways to reduce the number of things competing for drivers’ attention – with the result being a safer environment for everyone.

“I walk everywhere in Toronto – or I used to a lot anyway, pre-pandemic – and over the years I’ve been starting to feel unsafe at certain intersections,” Donmez says, noting that Pratt, her research colleague, is an avid cyclist.

This article by Rahul Kalvapalle was originally posted on U of T News, February 22, 2021.