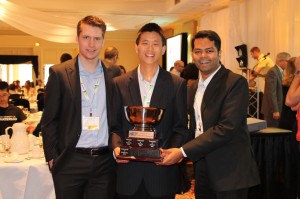 Canadian District Traffic Bowl Championship. The event is a Jeopardy-style competition that tests the students’ knowledge of traffic and transportation theory and practice. The UTTRI team won the event in a very close final against the University of Calgary and Mohawk College, earning it the right to compete at the 2014 Collegiate Traffic Bowl Grand Championship in Seattle this August. Stay tuned.

© 2023 Faculty of Applied Science and Engineering