“Just” Cities: Traffic-related air pollution and justice in the context of urban sustainability,” a Distinguished Lecture by Professor Dr. Julian Marshall of the University of Washington, drew a large audience to U of T’s George Ignatieff Theatre on February 5. An online audience of 250 attended via Twitter livestream @civmin.

Brief remarks are provided by:

SOCAAR’s Greg Evans touches on a central theme of the evening, stating in his introduction, “social justice should be part of sustainable smart cities.” 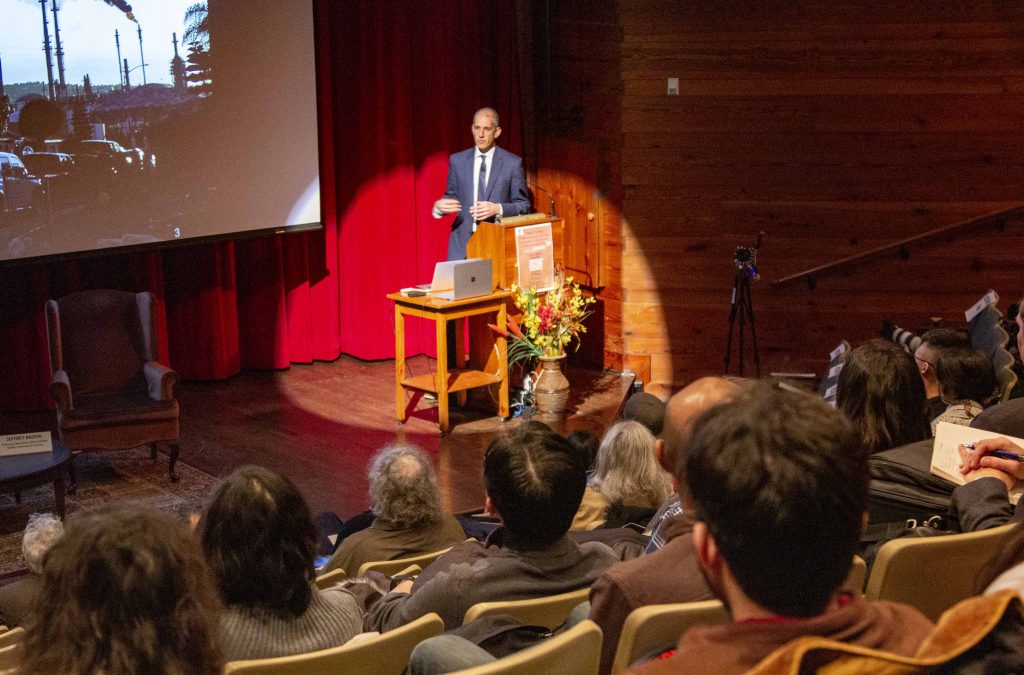 Featured speaker Professor Julian Marshall obviously agrees, and over the course of his lecture, demonstrates how social and environmental justice are intertwined. He shares the (mostly American) historical context for the unjust environmental legacy that continues to be felt now. “The past is present today,” he begins, and later follows with “We don’t all breathe the same air.”

“We don’t all breathe the same air”

Marshall notes that environmental health risks are higher in some communities than others in the United States because of higher levels of exposure to air pollution. He explains that long-standing, structural racial segregation created by the historical practises of redlining (1933-1977) and racial covenants (1920-1968).  Without this segregation, large racial disparities in terms of nitrogen dioxide (NO2) exposure would disappear. Using a land-use attributes model and extrapolating for modelled NO2 levels across the U.S., Marshall found lower levels of NO2 exposure in higher-income and White neighbourhoods. The reasons include segregation, consumption patterns and production patterns. The data suggest that Whites/Others cause the most pollution while being least exposed to it; the opposite is true for Hispanics and Blacks.

Marshall mentions the political buzz generated in the U.S. by his research, with figures such as Kamala Harris and Donald Trump Jr. sharing their thoughts on the issue of exposure to pollution and segregation patterns.

Electric vehicles (EVs) will reduce traffic-related air pollution only if the power plants use energy derived from renewable, zero-emissions sources, or “clean energy.” In the long-term, EVs do promise a benefit for air quality, as it will be easier to clean up the electric grid than it is to clean up the millions of combustion engines driving around.

Studies show that when EVs are brought in, urbanites can afford them better than rural residents, leaving rural residents to suffer from higher levels of air pollution.

On the path to environmental justice, Marshall stresses, it’s important to look at how pollution is generated in conjunction with who is most affected by the pollution.

The way things could be

Marshall states that, ultimately, the purpose of his research is to see how things could be. His suggestions include: 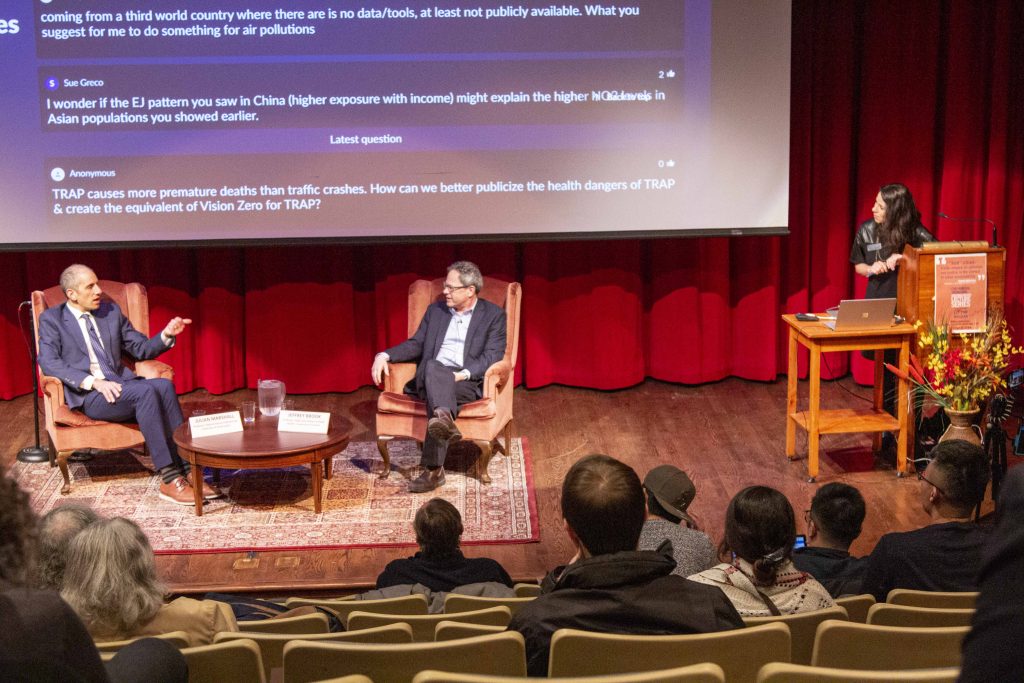 One interesting question relates to Traffic-Related Air Pollution (TRAP) in relation to Health Risk Assessments (HRAs), especially with respect to Marshall’s suggestion that TRAP be reduced by rerouting traffic away from LA’s downtown core. Both Marshall and Brook acknowledge that although HRAs are imperfect, they are the best data available, and it is difficult to assess “acceptable” levels of risk.

Marshall concludes by pointing out that a variety of tools and approaches are needed to solve environmental issues – such as air pollution from emissions – and to provide justice in the context of urban sustainability.

A “Research Roundtable with Professor Julian Marshall” the next morning was filled to capacity with U of T postdoctoral fellows and graduate students interested in sharing their research. Marshall tweeted his appreciation: 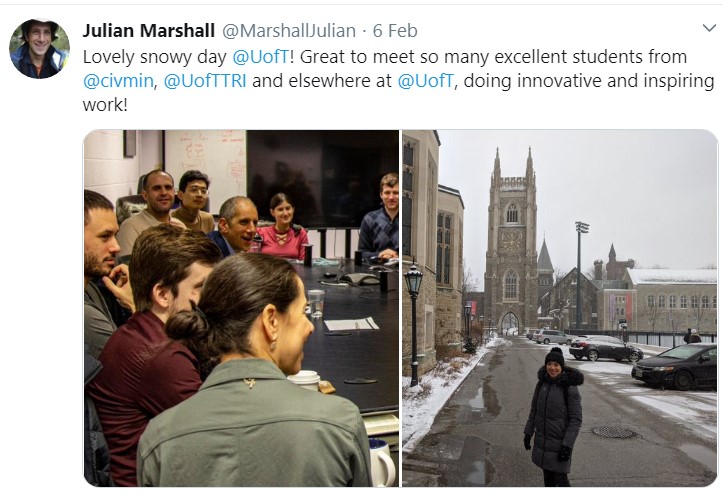 Julian Marshall is the Kiely Endowed Professor of Environmental Engineering at University of Washington. Dr. Marshall studies exposure to air pollution, including air pollution health impacts of transportation and electricity-generation; disparities in exposure; and air pollution measurements in low-income countries. He is Associate Editor for Environmental Health Perspectives and for Development Engineering. Dr. Marshall earned his Bachelor’s degree in Chemical Engineering with High Honors from Princeton, and an MS and PhD in Energy and Resources from UC Berkeley.

Dr. Marshall has published >100 peer-reviewed journal articles, including several “most-read” / “most-downloaded” articles. Grants he has contributed to during his career total >$30 million. He currently is dual-PI on a $10 million EPA grant supporting the Center for Air, Climate, and Energy Solutions (CACES).

This talk was presented as part of the Distinguished Lecture Series by the Department of Civil and Mineral Engineering, University of Toronto, and co-sponsored by the University of Toronto Transportation Research Institute (UTTRI) and the Southern Ontario Centre for Atmospheric Aerosol Research (SOCAAR).

Organizers thank volunteers Sanjana Hussain, George Kell, An Wang and Junshi Xu for assistance with the event and this article.