The negative effects of increasingly long commute times in the GTHA have been widely reported.

Last week, researchers and partners launched a survey to gather data specifically on the commutes of college and university students. The goal? To help transportation planners and policymakers take student travel needs into account.

StudentMoveTO 2.0, a research project to study student travel behaviour, is emailing a travel survey to about 600,000 GTHA students in the period October 1 to mid-November. 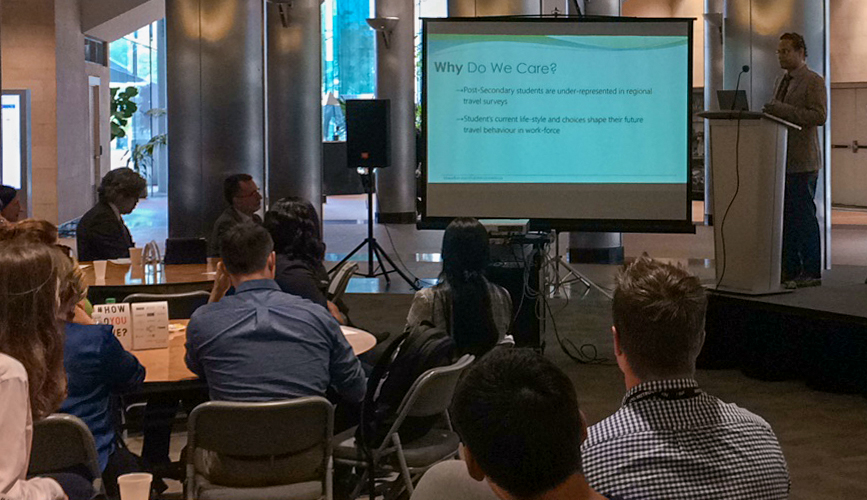 The three-year research and partnership program aims to improve understanding of the travel behaviour of post-secondary students across a wide swath of  the Greater Toronto and Hamilton Area (GTHA).

Dr. Raktim Mitra, from the School of Urban and Regional Planning at Ryerson University, and Dr. Khandker Nurul Habib, from the Department of Civil and Mineral Engineering at the University of Toronto, are leading this transportation survey-based research.The 2.0 project is the second iteration of the StudentMoveTO survey in 2015 which had a considerably smaller scope with only four participating Toronto universities.

According to student contributor Sanjana Hossain (Civ PhD 2021), the StudentMove 2.0 survey was built with the TRAISI web survey builder tool developed at the University of Toronto. Hossain helped finalize the questionnaire and implemented the survey in TRAISI.

Students are asked to commit 20 minutes of their time to participate in the online survey. Whether they walk, take transit, cycle, wheel, drive, or use any other form of transport, the research study relies on all students to share their travel habits as accurately as possible. No personal information is saved in the survey database.

Survey responses contribute information that is collected, analyzed and ultimately used to highlight the importance of addressing students’ travel needs in planning and policy making.

The project brings together ten universities and colleges:
and four government and community partners:
All 14 partners, 15 team members and five student contributors are listed on the StudentMove 2.0 project website.